How Solar Film Works?
--Window Film works by reducing heat gain and blocking solar radiation. Solar Radiation, also called solar engery, is comprised of three components, ultraviolet radiation (UV), visible light, and near-infrared radiation (NIR). NIR makes up 53% of the solar spectrum, visible light 44%, and UV 3%. When the sun hits your window, the clear glass will only stop about 11% through absorption and reflection combined. The remainning 89% of the heat and energy is transmitted through your window. 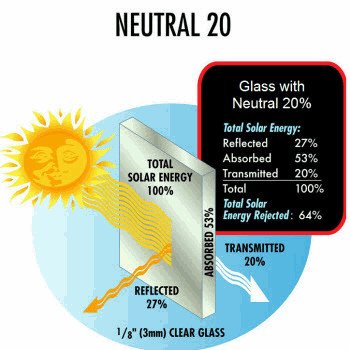 Solar Control window film will increase the amount of heat absorbed and reflected. Thus reducing the amount of heat transmitted through the window. As stated earlier, the degree of adsorption or reflection will depend upon the material used in the manufacturing process. When dealing with films that absorb heat, rather than reflect it. Careful consideration and precaution should be taken. Heat absorption car cause thermal stress to your windows and cracks will appear throughout the window.

This is Why metal films are highly recommended for residential and commercial application. The metal films will reflect up to 55% of the solar energy and only absorb around 33%, giving you as much as an 88% reduction in solar energy transmitted through your window. This subsatantial reduction in heat gain lowers the load placed on your Heating Ventilation and Air Conditioning (HVAC) system during peak hours of energy consumption when utility costs are at their highest; which can yield up to a 30% saving on your utility bill.